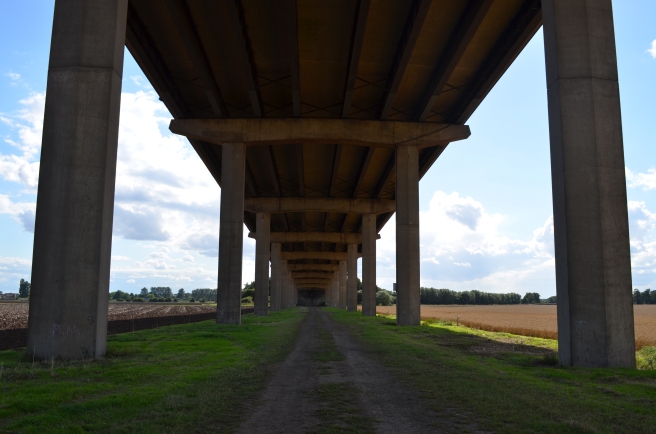 A landscape picture is composed on the vertical. The view is through a vertical ‘window’. From top to bottom it consists of foreground, middleground, background and sky, all stacked on top of one another. In reality, the clouds which are ‘above’ the hills in background of your picture are miles beyond them, and the hills are beyond the lower hills in the middleground. Look at them on a map to see how skewed your picture is. A good landscape picture gives you some indication of landscape as horizontal extension and as temporal extension; it leads your eye into the distance, and into the past or future. However, it also compresses distance and time, bringing the distant and the past/future closer to the plane of the picture. (In paintings made before photography led to the triumph of the idea of the picture as instantaneous – as temporally ‘thin’ – scenes separated in space have less the impression of taking place simultaneously. Look at the approaching guards in the backgrounds of Bellini’s and Mantegna’s related paintings of the Agony in the Garden in the National Gallery. The events could be simultaneous – Jesus praying as the guards approach – but it is hard to read it that way and the approaching guards point anyway towards the future arrest of Jesus).

You can rarely imagine walking very far in landscape paintings, even when the background is distant, though there are exceptions, such as Ruben’s painting of his home Het Steen, also in the National Gallery. This might be because background, middleground and foreground are presented as discrete ‘things’ juxtaposed in space (like objects in a still-life), rather than as parts of a single extension (unlike in Rubens’ Het Steen painting). Distant mountains are imagined as like scenery at the back of a stage, and the receding space behind the picture-plane as possessing the same sort of depth and proportion as a stage. The horizontal is what is denied by the vertical picture, what is squeezed and squashed out by this foreshortening. Looking at maps and going on a walk bring back the horizontal, which is the real essence of landscape, and time.

Maps are pictures of landscape that stress the horizontal. Maps are pictures of landscapes you could walk across. Maps express height as contour lines and hachures, but it is essentially landscape as surface. Maps bring time into landscape, because they depict land as you would cross it. A walk is an experience that unfolds over time. It is about the horizontal landscape; about land. The experience of walking is quintessentially the experience of covering distance. Views come and go. Exceptional views you might stop to take in, but the walk’s content is as much the boring stretches as the interesting. The unfolding experience is one of distance and time, but the attitude of walking for the sake of views tempers your memory of a walk. Covering distance is hard work, which wearies the feet and dulls the mind, but this aspect is the quickest to be forgotten. A walk is taken as much in the feet and the mind, but memory selects the views, or certain views, and files them away as indicative of the walk. Memory turns the walk into pictures, as it does with life and time in general. Recovering the walk as it unfolds is possible through a different attitude to walking and a different kind of recollection.

Certain walks are boring, and these boring walks can approach the condition of the ‘pure’ walk, devoid of any content except walking and distance themselves. The pleasure in these sorts of walks is that of experiencing with the feet a distance that would otherwise be an abstract quantity viewed on a map. Instead of looking back at the outstanding views of the walk, you look back at the distance covered, as anticipated and recollected via the map. From this point on the map to this point. These walks make sense only with maps. Their drama and incidence are only visible on maps. The appeal of a walk from the mouth of the Aire, where it joins the Ouse, upriver is the dramatic shapes made by that river as it snakes and hooks. It is also somewhat arbitrary and somewhat symbolic. On the ground the drama is often disappointing: invisible. Even the dramatic meeting of the two rivers – the promise of being able to stand on the very tip of the cusp of land created by the acute angle of the rivers and look across to the opposite cusp created by the sharp bend in the Ouse at Asselby Island – is denied, because the river bank at this useless point, beyond the flood banks, is an impenetrable thicket of willows, policeman’s helmets, nettles and rubbish. But this is as it should be, because this is a perverse walk and the land itself, open and intelligible on the map, is allowed to be perverse. It is allowed to hide in the bushes and stick its arse out at you. On the ground are the real facts.

(A footprint in the mud at the start of a barely visible path led me to venture into the thicket, but I couldn’t get ‘the view’ and I got lost trying to retrace my way. I had to stamp down policeman’s helmets stems and walk over nettles and dead branches, uncertain where the wildly uneven ground was below my feet; a feeling like walking on water, or air. I worried that I was going to come across a corpse decomposing forgotten in its rotten clothes in one of the hollows).

I wanted to walk up the river Aire from Airmyn (where it joins the Ouse) back up towards where it is crossed by the East Coast Main Line, from where I have seen it from the train. From the train it zig zags nicely between flood banks (a picture!) I didn’t get anywhere near that far, because I didn’t bother to measure on the map how far it was with all the meanderings and because I lost my glasses and decided to turn back for them. I was also defeated by the boringness of pure distance; by the lack of a sense of progression. The defeat felt as ignominious as the loss of my glasses, which I didn’t find.

I got some way past Rawcliffe (which was once bigger than Goole, so a sign said). I didn’t have the will to go as far as Eskamhorn (site of the second ferry in the Rawcliffe area), even though its name appealed to me. Boring land, but the trick is to unpick it. The land has the same non-quality as a supermarket car park: the same drive of absolute utilitarianism in agriculture as in retail spaces obliterating any trace of the particular as irrelevant. The most charismatic features are all engineered ones: motorway viaducts, wind turbines, power stations, swing-bridges. The land itself is a blank; a car park for crops. Only the river itself has retained some of its archaic and forgotten horror, but you have to stand on the very edge to appreciate it.

The river is the most striking feature on the map, a serpent coiling across the land. From the ground, anywhere except close up, it disappears into its own hollow and becomes yet another evacuated feature in a utilitarian landscape, unremarkable and overlooked. Close up you appreciate the brute, obscene physical force of the thing: the coils on the map suggest not lazy meanders but writhing body, and the fast-flowing dense brown water surges with the power of viscous life blood forced along by a beating heart – the life blood of time and history. There is something breathtakingly brutal about the sheer efficiency and austerity of the river as machine, or as body. The ten feet or so of featureless muddy bank, presumably marking the normal range of its tidal flood (it must be impressive when in flood), are as ruthlessly purged as the cylinders of an engine, or a motorway hard-shoulder. The river permits no pity or special-pleading. The mud is like lubricant, or a mucus lining, speeding the flow and at the same time forming itself from the river’s substance. In the same way that an engine abrades itself and accumulates as tiny fragments of metal in its own lubricating oil, so the river carries and reforms its own gut: hardness yields to softness and brute force. Standing on the edge it is hard not to imagine slipping down into the water. You would never stop yourself from slithering down the muddy bank, a dead-weight of body with nothing to grasp but ooze, and no chance of getting back out as the current sucked you under. It makes you feel like a body, a weight; the weight that would pull you down if your foot slipped. The eye and mind can skip free of gravity, but the body is dead weight at the end of the day.

I ended my walk underneath the M62 bridge over the Ouse. Walking under the carriageway between the vast concrete pillars is like walking up the nave of some strange temple: York Minster, Stonehenge and an Egyptian temple all rolled into one, but with sides open to the light and views across golden wheat fields. The quality of sound – the muffled and distorted sound of the traffic above – is also the disorientating acoustic of a sacred space. The sense of space is exhilarating. At the end of the profane concrete sacred grove is a scummy polluted stream full of rubbish and beyond it a concrete slope covered in graffiti resembling the sacred rock paintings of some aboriginal tribe. I wouldn’t have been surprised to see bones placed in crevices where the slope meets the underside of the carriageway, or to find the remains of a sacrifice. It was a space for reverie after the dullness of the river; mineral lightness and loftiness to counter liquid heaviness.

I am an artist, illustrator and librarian. I am currently working on a body of abstract 2D work, which I think of as a sort of phenomenological endeavour. When I'm not doing that, or sleeping, or gardening, or being dragged to social engagements by my wife, I work for the University of York Library on York Digital Library Project and the LIFE-SHARE Project. This blog will be about things I observe, or are thinking about, or want to make sense of through writing. Nobody ever reads in apart from my wife, my mum (occasionally), and someone called Dave Kirkman. Other things about me: I'm married to Ioana, who comes from Bucharest; I don't like chocolate; I ride a bicycle; I'm a Christian; I went to Glasgow School of Art, the Royal College of Art and University of Northumbria; I'm learning Romanian (slowly); I drink a lot of tea; I just discovered a hole in my black corduroy trousers; I don't comb my hair often enough; some of my favourite films are: Sans Soleil, Ostrov, Onegin, Decasia and Andrei Rublev. That's enough. You can also follow me on Twitter. My username is Mottlegill. View all posts by Matthew Herring