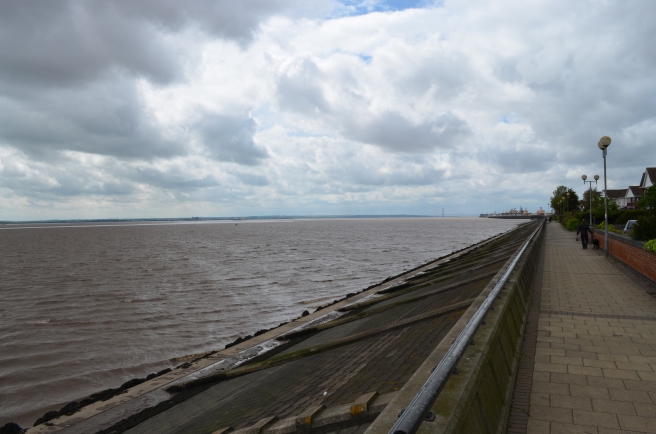 [The following notes are fairly unedited from my notebook.]

Why do people stare into water? Watching families coming in and out of The Deep (an aquarium), they nearly all take a short detour to look over the railings into the churning grey-brown Humber. Surely, they’ve seen enough water in the aquarium, and now it’s time to go home, or to lunch, or on to the next attraction? Some take photos of themselves with the estuary behind. Excited children in pink cardigans and neat blue jeans; mothers in saris carrying bags and pushing pushchairs; couples in dry, clean clothes  all take a moment to cast a votive eye into the water. Next to their neatness and comfort, the water represents an obscene chaos. Bodies cosseted in comfortable, well-made clothes move from a warm, safe building across a safe car park and into comfortable, upholstered and enclosed auto-mobiles without a thought, save a few seconds’ glance into the water. A man-made world channels bodies comfortably about from one safety to another. It is strange to think how thin the barrier is between this human-friendly tunnel and a completely hostile other: just railings. The waters of the river would not respect the boundary of woven fabric with which we separate our inner from our outer, or public, selves: the turbulent waters would defile cotton and acrylic textiles alike and deposit silt from fields miles upriver into the wove.

The families peering over the railings into the river are a bit like the crowd at a Roman circus, watching gladiators slaying each other. A thin partition separates them from violence. On the one side comfort, ease, safety. On the other turbulence, chaos, strife, death. A thin barrier decides whether they are fighting for their lives or merely looking on. The choppy, boiling waves do look like battling souls, mired in their own gore. Endless, senseless war from some grim, apocalyptic fantasy computer game world.

Why do we talk about a ‘body’ of water? Body-as-mass; body-as-extent; body-as-expanse. A body has form (read ‘limits’). A body of water has limits and form: a lake, a sea, etc. Mass without limits wouldn’t be a body. Infinite water wouldn’t be a body – it needs limits. But water’s principle is limitlessness. We stare into water because it could be limitless; it represents limitlessness. Water is limitless, because water usually flows into other water; into all water. Your brain is water. Thought is water. Clogged, dead thoughts are ‘Lehm’ (earth, loam) in a quote I like from All Quiet on the Western Front. Thought is fluid. What does it feel like to think? Isn’t it like a kind of flow, like water flowing over/through you?

Water and air are both elements that we can’t enter without some special contrivance or effort. We can’t go into the air without some kind of aircraft, and we can’t go over water without a boat, or by swimming (most of us can’t swim very far). So staring into air or water represents a yearning for where we can’t go. When we stand on the edge of the land we have reached the limit of where we can go. So water reminds us of our limits. It is infinite, we are not. We long to enter its eternal flow.

Estuary water is thick like blood. Impure. Something between earth and water. Staring out across the estuary is like staring across a rolling, moving field; like geology speeded up. Estuary water has taken up earth and also taken on some of its sluggishness. The estuary is like a field you can’t walk across. Distances and scale are deceptive. A small boat is lost amongst the choppy brown waves; waves which look like furrows. Words flow like estuary water, sluggish with the silt of meanings. The estuary resembles drying concrete.

Silver reflections are deceptive. Knife-like shards of silver rake like stilettos over the water. (Light hitting parts of the river where the current has surfaced to render the water flat, I suppose). Shadows, of clouds obviously, move like shadows of bears’ claws. Where the sun really catches the water and is reflected back through some depth, the water glows gold like tea. Reflective water pretends that it isn’t there, or that it is something else: light, silver, concrete, steel, mercury, flesh, whatever. Solid or immaterial, its mood changes. But the mood-changes are those of the sky. The water itself is dead. The light playing on the surface of the water is like a living face projected onto the dead face of a corpse, animating it deceptively. The light dances over it, seeming to change it, but the water is unchanged, travelling in the same headlong direction like the combined souls of the dead sleepwalking to Hades. (The waves do indeed look like individual souls rushing along, at the double. Thousands of grey heads bobbing and ducking). The point about water is that it is always the same.

The oil refineries around Immingham, on the other side of the estuary, look like a child has been sticking canes into the sand dunes, all at different heights and spaced in clusters and individually. The chimneys, I mean. They look like pea sticks in an allotment. Another simile that comes into my mind is that of strange fungal structures – fruiting bodies firing spores into the atmosphere, polluting the air with life. Refining oil is all about taking something from the ground which is the product of decay and transmuting it into a multitude of products, from plastics to spirits and gases. Some of the products of that process are vented into the sky as waste.