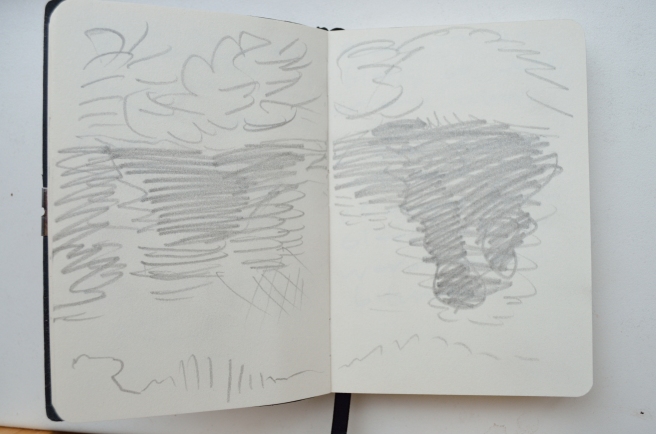 The flat countryside of England seems to be a land bleached of meaning, spent and exhausted of place. The discreteness of place is provided on a mico-level by the varied textures and abrupt juxtapositions of plants and by the ankle-deep undulations of the path itself as it sinks and rises over the bones and fallen flesh of soil turned over by hands and machines over millennia – as if the soil itself were the bodies of soldiers fallen in the battles of centuries and folded over and over again and again then forgotten. The space underneath a fallen over clump of tansy: the bitter taste and sharp smell of a dark green shade – shade for the metallic green of a tansy beetle’s shell to shine from. Pale poppies by the side of the path for a short while, shedding petals like shields or banners, and then no more of them. A row of last years giant hogweeds stand like scarecrows with mad arms and mad heads of seeds and holding withered leaves like rotten handkerchiefs. How satisfying it would be to rush at them with a cavalry sabre and slash the hollow dry stems down! Varied patches of creeping thistles, butterbur and nettles. Meadow cranesbill (only one).

Smells mark places, too. Sickening policeman’s helmets give over to pineapple weed (before four wet and large dogs fuss me and dispel it – or did the dogs’ feet crush the pineapple weed and release the smell in the first place?) Sudden smell of wood smoke (that cliché). Is the boundary between policeman’s helmets and pineapple weed there for everyone who passes by, like a contrived water trick in a renaissance garden, or just for me, a gift of chance eddies of the wind at a particular moment? Or a figment of my imagination? The woman whose dogs fussed at me evaporated like a volatile oil and vanished from existence the moment I got out of earshot of her calls to her dogs (calls which, for a while, I misinterpreted as calls to children, as I forgot about the dogs).

It is amazing that plants can still quietly grow up and bar our way, mould our world as much as we mould theirs; limit our paths. Abandon a path for a year and up come policeman’s helmets, hogweed, willow herbs as tall as a man, and you have to go round. This time, however, I took the wrong path worn through the rank grass meadow and ended up the wrong side of a plantation of willow; the real path was still there.

Loosing yourself in a walk

The more you walk the more you go into yourself. It becomes about covering a distance then emerging, or surfacing like a submarine. I don’t want to sketch, because I want to reach the confluence of the Nidd with the Ouse. I want to cover that distance. On the way I know I may not be there, because my thoughts will absorb all of my attention. I might think about a conversation I had with somebody years ago, or might have had, and which came into my mind for who knows what reason and for the first time in who knows how long. The mind turns itself over like the soil and the bits and bobs of a past self and moment come up to the surface again, to be picked over then discarded. Aching limbs and a hint of a headache aid this process – as does a flat land. Today, though, I’m a bit more alert to notice things and I manage to wring some thoughts out of the fabric of my brain which might be useful when I get home, if I write them down and don’t forget about them. Or I might get home and decide they are a load of crap: the last sour water squeezed out of my spent mind.

A group of walkers ahead of me, which thankfully vanishes off somewhere, between the tansies and the ash trees, before I catch up with it, gabbles like a flock of geese. The bigger the group the more everybody gabbles and renders even the most spectacular walk banal. It brings to mind the group of elderly tourists from New York state I encountered at Megiddo, who all talked incessantly and at the same time, jaws going with mechanical regularity, and the lady with Lucozade-orange candyfloss hair who I had to lend an arm to climbing back down the slope from the archaeological site, who talked at me about her friends as if I knew them all – a monologue that had simply continued from before I came into her orbit, which was aimed at nobody, and which suggested that she noticed not at all that the person by her side was no longer one of her party of geriatric Olympic talkers. The only snatch of it I can remember was about somebody not having brought their rain coat. I imagine myself telling this story to somebody.

‘Land’ is a terrible word. What is fought over. ‘The Land’. Our land. Romanians call Romania ‘Ţara’ – the land, Blighty. Tristan Tzara was a pun: triste în ţara (sad in Romania; sad in the land). Land is stuff, quantity not place, earth.

I sit by the river near the end of my walk. The river is mysterious. I try to think of what to liken the peaty tea-coloured water to. It is all surface. Guinness. Black rippled glass. Wrinkled bitumen paint. Ink. Ink – it is like a river of black ink. It is actually black. Or, with the reflections, black and white. When the sun comes back out it changes subtly into the brown of bitumen. But water can be any colour. Sitting here it is truly like ink – I can easily kid myself into thinking that it actually is black ink flowing towards York. Am I real? If I walk into the river, I will wake up at home out of a reverie I was momentarily having while sharpening a pencil over the bin. The river is a river of thought.

Flat landscape is something to travel across, but there are different ways to travel.